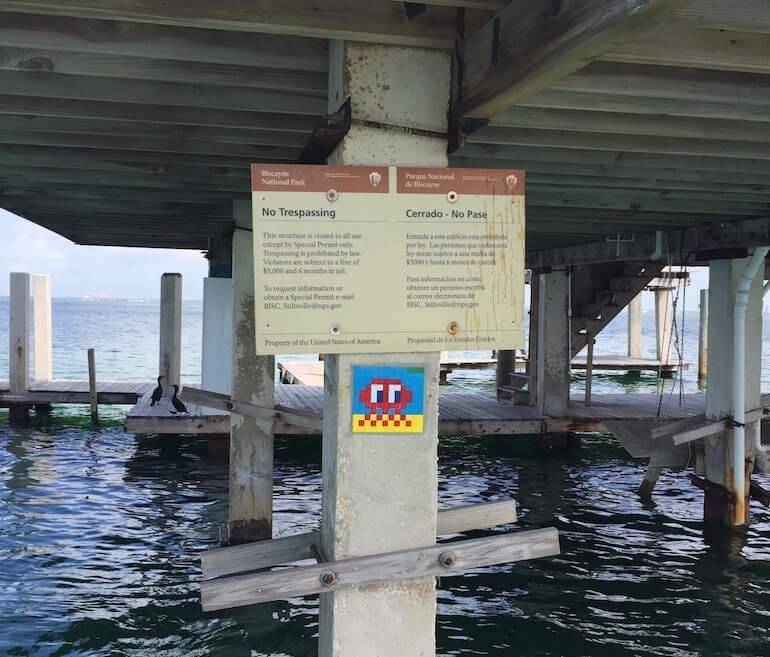 There are many spectacular Miami sightseeing areas that are only accessible by water, either by private boat, using a boat rental company or jumping on a boat tour of Biscayne Bay. However, one of the more interesting items found only by water are three colorful “Space Invader” mosaics, put in place around the bay in 2012 by the popular French street artist known as Invader. The artist launched his mosaic invasion of Miami, during the globally attended art fair, Art Basel and the colorful, pixalated mosaics have developed somewhat of a cult following, with visitors from around the world coming to Miami in hopes of “geo-tagging” or photographing all the Invader mosaics placed around the city. The majority of the 20 or more mosaics were placed in areas of Miami that can be found fairly easily on dry land. However, three of the mosaics can only be seen by boat as they reside in remote areas of Biscayne Bay. Two mosaics were placed on two separate houses in Biscayne National Park’s historic Stiltsville and a third resides high above the water line on a large support pillar of the Rickenbacker bridge connecting Miami to Key Biscayne. On the global scale, Invader has placed almost 3000 mosaics around the world. Fans and followers of his work keep track of his placements and travels via a map found on the artist’s website. There is also a smartphone app released by Invader that creates a game for fans to find the art pieces and accumulating points once photos are taken of the mosaics they find. Currently there are almost 6000 people signed up the app with posts coming in everyday. To see the mosaics found in Biscayne Bay, you can book a private or small group sightseeing boat tour with Ocean Force Adventures here. To read more about the colorful and historic houses of Stiltsville or how to get to Stiltsville visit Stiltsvillemiami.com. Space Invader from Private Miami Boat Tour